Our recent research report on the effective tax burden across the 16 largest energy-producing states was just released and is available for download. The report extends the typical effective tax rate analysis to personal income and sales taxes to better account for vastly different overall tax structures across the producing states. These are also the two primary sources of tax revenue in Oklahoma. 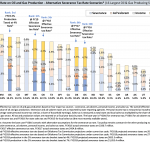 “This report provides estimates of the effective tax burden faced by the oil and gas industry in Oklahoma and fifteen other major energy-producing states. Evaluations of oil and gas tax burden are typically restricted to the role of severance taxes and ad valorem taxes related to oil and gas production. Data is readily available for these taxes and they capture much of the direct tax contribution from oil and gas production. However, these two tax streams do not capture the tax contribution of the oil and gas industry more broadly. The industry and its employees make significant contributions to several other major tax streams as well. In Oklahoma, the most important among these are personal income tax and sales tax, two of the largest sources of revenue to state and local government. Other smaller tax streams include corporate income tax, franchise tax, motor vehicle tax, and motor fuel tax.

When doing cross-state comparisons, the use of a narrow set of taxes can produce a grossly misleading view of the overall tax contribution of the oil and gas industry. The major energy-producing states assess a range of taxes and rely on them to varying degrees. Some producing states do not levy a personal income or sales tax and rely much more heavily on severance and ad valorem taxes to fund state and local government spending. Even among states that do levy income and sales taxes, the effective rates vary greatly. The size of the oil and gas industry varies as well, as states with a large oil and gas employment base receive relatively more tax revenue from the industry. Drilling-active states also tend to receive significant current tax revenue from increasingly capital-intensive wells relative to producing states with little drilling activity.

The purpose of this report is to provide a broader comparison of the tax burden faced by the oil and gas industry in Oklahoma. Estimates of the combined effective tax rate for severance, ad valorem, personal income, and sales tax are provided for Oklahoma and fifteen other major producing states. While this does not provide an exhaustive review of the total tax payments made by the industry, these taxes comprise the two largest sources of state and local taxes in Oklahoma and capture the major taxes typically derived from oil and gas drilling and production activity.