To give you a feel for which state economies are the most dependent upon oil and gas activity, two measures of the energy sector’s share of the economy are provided for the 16 largest oil- and gas-producing states (by volume of oil and gas produced).

The first measure is the average share of total state real GDP growth the past 15 years derived from each state’s mining sector (mining is primarily oil and gas in most states). 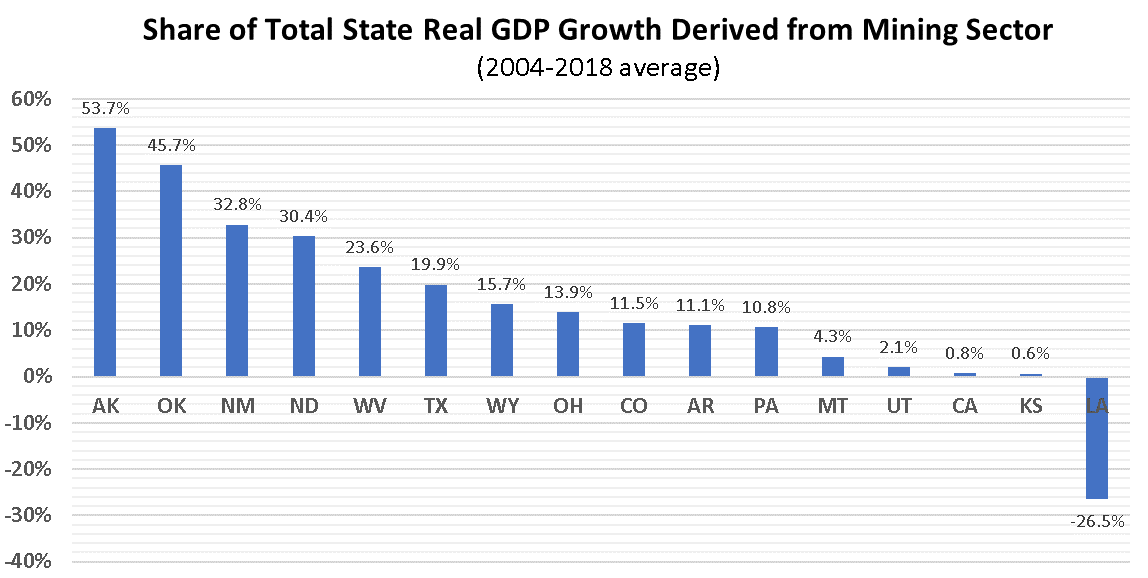 Familiar faces lead the way, with Alaska and Oklahoma deriving roughly half of all real state GDP growth the past 15 years from the mining sector. States with a more than 15% share include New Mexico, West Virginia, Texas, and Wyoming. States with a 10% or higher share of real GDP growth from mining include Ohio, Colorado, Arkansas, and Pennsylvania. The remaining states are well below the 4.5% average share for the nation.

The second measure is the average share of total state household earnings derived from each state’s oil and gas sector the past 15 years.

Oklahoma leads the way with a 9.3% share of all household earnings coming from the mining sector, followed by Texas at 7.4%. Wyoming, Alaska, and Louisiana have a share above 5%. Colorado, North Dakota, and New Mexico have shares above 3%, well above the 1.1% U.S. share.

The two measures suggest that energy-producing states with both a high share of state output (GDP) and a high share of household income derived from the mining sector are most likely to experience economic drag from the oil and gas price collapse. These include Oklahoma, Alaska, Wyoming, North Dakota, Texas, New Mexico, Colorado, and Louisiana.

The other energy-producing states will likely experience far less economic weakness from the oil and gas sector collapse.

Both OKC and Tulsa Now Firing on All Cylinders

Oklahoma's post-pandemic recovery has been disappointingly slow relative to the nation. The state and both major metro areas have lagged well behind the U.S. in…