We often refer to Colorado as one of the ‘Super States.’ That select group of high-performing states with strong job and wage growth, rapid in-migration of new residents, an educated workforce, abundant high-tech activity, and so on. You get the picture.

But it is the old fashioned commodity markets, particularly crude oil and natural gas, that are once again acting as a ball and chain to slow down hiring in The Centennial State. The oil and gas industry hit the wall at the end of 2014, and it continues to take some of the starch out of job growth in the state.

Our pic of the week shows the rather steep and continued slowing in the rate of job growth in Colorado since January 2015. Hiring bounced back sharply following the recession and by December of 2014 Colorado was adding jobs at a remarkable 3.8% annual pace, or nearly 93,000 jobs annually. North Dakota was arguably the only state to outperform Colorado on a consistent basis in the post-recession period up to this point. 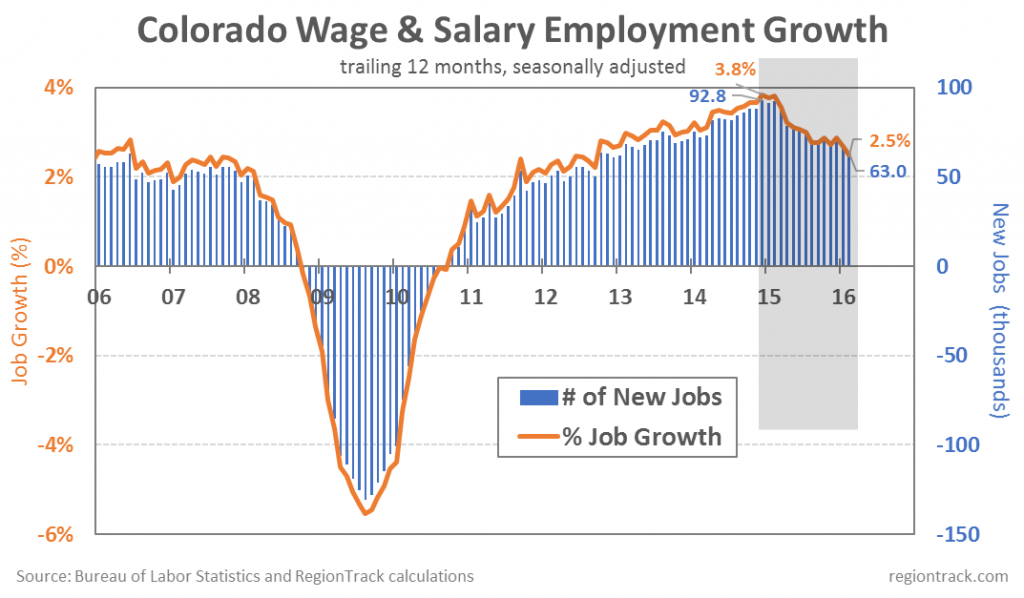 Hiring in the state has since slowed steadily to a 2.5% pace (63,000 jobs per year) with further loss of momentum visible in revised data released recently. Colorado now ranks 11th among the states in job creation the past 12 months, trailing the competing states of Idaho, Utah, Oregon, Tennessee, Washington, Florida, and Arizona, all Super States in my book and which are all currently adding jobs at a 3%+ pace. Our outlook calls for further slowing in state job growth to slightly above 2% by the end of 2016 as crude oil and natural gas prices remain depressed.

Despite the slowing, Colorado remains a Super State and 2.5% is still rapid job growth.   It also makes Colorado the fasting growing state with a relatively large oil and gas complex. In Texas, job growth has slowed from a 3.7% pace to only 1.4% in the same period.

So, while operating well below peak efficiency, the Colorado economy is still adding jobs at an impressive pace given the severity of the oil and gas downturn across the state.