Layoffs in the oil and gas sector are now clearly weighing on overall employment in the top-tier energy-producing states. Our pic-of-the-week illustrates the sharp slowdown in job growth in the energy states relative to the non-energy states in just the past six months.  In sharp contrast to the strong labor market conditions enjoyed in most other states, the energy-producing states have quickly shifted from far outperforming the nation to substantially under-performing.

So far, the weakness is largely confined to the top tier of energy states (AK, LA, ND, OK, TX, and WY). Since December 2014, total statewide wage and salary employment has actually declined in Alaska, Louisiana, North Dakota, Oklahoma, and Wyoming. Texas managed to add jobs in the period, but growth has slowed to a crawl relative to the 3%+ annual pace it enjoyed in late 2014. 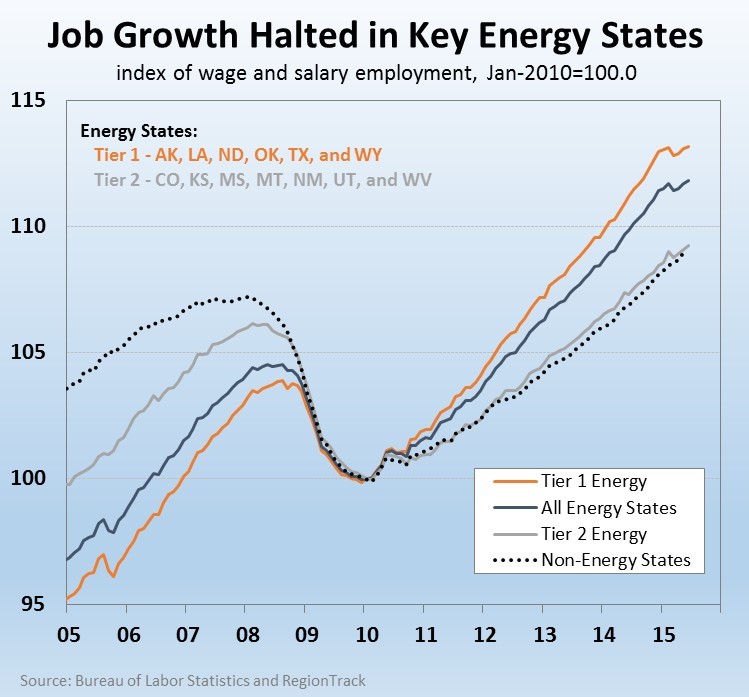 No clear signs of spillover from the collapse in oil prices are visible in the second tier of energy-producing states, which includes Colorado, Kansas, Mississippi, Montana, New Mexico, Utah, and West Virginia. This group of states continues to add jobs in near lockstep with the nation.