The Oklahoma economy shed more than 25,000 jobs and state tax revenue dropped by about 10% in the oil and gas cycle of the past two years.

So, is the recession that has weighed so heavily on the Oklahoma economy and the state budget finally coming to an end? Yes, it appears it is.

Overall state employment bottomed in the second half of 2016, but the key step needed for a statewide recovery was for the energy sector to rebound and begin hiring again. Energy sector hiring rebounded sharply beginning in the first quarter of 2017, and drilling activity has surged as well. 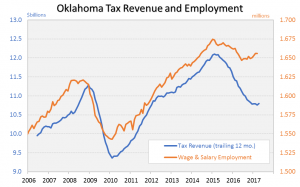 A bottom is now forming in tax revenue across the first and second quarters of 2017. This should provide a considerably stronger budget position for the state in FY2018 as both the oil and gas industry and the broader economy rebound further.

Our recent research report on the effective tax burden across the 16 largest energy-producing states was just released and is available for download. The report…