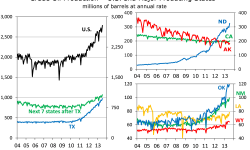 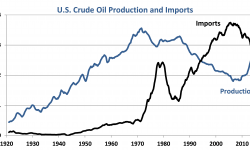 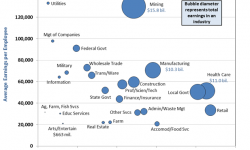 OK Oil and Gas Earnings Share Near Oil-Boom High in Early 1980s – The economic role played by the oil and gas industry in Oklahoma has returned to near levels last seen in the Oil-Boom days more than three decades ago. Remarkably, earnings across the mining industry now total $15.8 billion, or 13.7% of all earnings statewide. And as the graphic shows, the tiny utilities sector is the only major industry sector within shouting distance of mining based on average earnings per worker.

Mark Snead is quoted in a recent editorial in Oklahoma Energy Today concerning severance taxes in Oklahoma. The editorial focuses on the differing economic impact of the oil and gas industry in Oklahoma vs. North Dakota. Despite North Dakota's greater…