Oklahoma’s crude oil producers are expected to experience a 38.1% drop in revenue from crude oil production in 2015. In dollar terms, this reflects a $4.35 billion swing from the record $11.4 billion in crude oil revenue produced in 2014. Our pic of the week illustrates both the amount and value of crude oil produced annually in Oklahoma since 1981.

We currently expect 2015 to be a year of sharply falling prices offset in part by slightly rising production on a year-over-year basis. The 2015 estimate reflects our current outlook of 136.0 million barrels of production this year, up 6.25% from the 128 million barrels produced in 2014, and an expected average price of $52/barrel for the full year. The average price for the first quarter is slightly below $45/barrel. 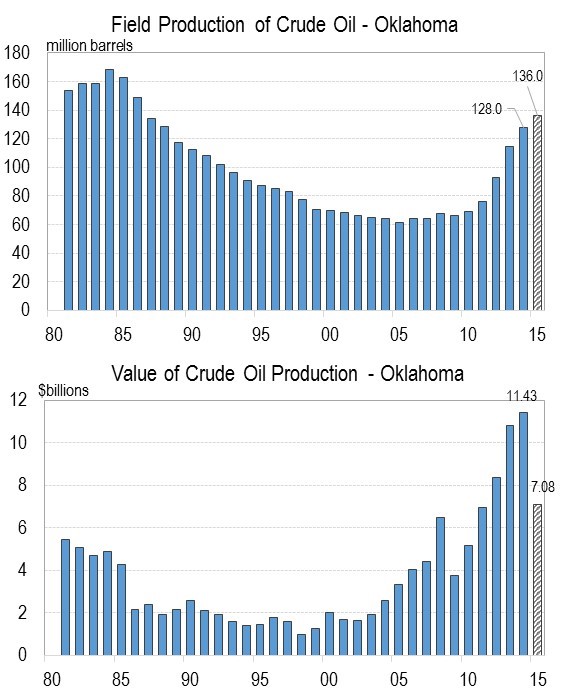 This is certainly a large expected decline in revenue, but it is far from unprecedented on a percentage basis. The largest drop in in the period occurred in 1986 as production value plunged 49.6% near the end of the Oil Bust. More recently, production value dropped 41.8% in 2009 as oil prices collapsed during the recession. A similar decline of 37.8% took place in 1998 as the industry hit rock bottom under extremely low crude prices.